Remarkable Stories from the Holocaust

With her mother performing backbreaking labor for the Nazis in the rock quarries of Transnistria, Paula Neuman Gris was the sole caretaker of her baby sister. Barely older than a toddler herself, Paula had to use her own smarts and spirited nature to survive. Experience Paula’s incredible story of determination at the Breman’s Bearing Witness, Jan. 17, 2016.

On 05/23/1961 Perla Mark, the wife of Dr. Abraham Jakob Mark, testified in Jerusalem at the Adolf Eichmann Trial. Session 48 begins with the testimony from Perla Mark who describes the burning of the main synagogue in Czernowitz and the murder of Jews including her husband, the town’s chief rabbi. The testimony from Theodor Löwenstein follows. Löwenstein describes the physical measures against the Jews in Romania including the pogroms in Jassy, Bessarabia, and Bukovina. Löwenstein gives an account of the deportations from Czernowitz to the Transnistria and Bogdanovka camps. He also gives an estimate of the number of Romanian Jews that were exterminated.

Guest post by Laurie Rappeport, Safed/Israel: One of the biggest challenges that present-day Holocaust researchers face is the dwindling number of survivors who are still alive to bear testimony to their lives under Nazi rule. Many Holocaust memorials and museums, among them Yad Vashem, are working against the clock to collect testimonies and conduct research that can only be accomplished as long as first-person witnesses are accessible.

In addition to memorializing the victims these investigations are also frequently used to honor Righteous Gentiles — people who risked their lives to save Jews during WWII. Numerous archivists and researchers at Yad Vashem are trying to ascertain the needed information in order to acknowledge these individuals.

Sometimes, information about an episode or activity comes to light unexpectedly. Such was the case of Irena Sendler, a Polish woman who was honored by Yad Vashem in 1963 for her role in saving over 2500 Jewish children from the Warsaw ghetto. Sendler received one of Yad Vashem’s first Righteous Among the Nations honorariums but after she returned to Poland her story was forgotten. In 1999 however, a group of non-Jewish schoolgirls from  Kansas, involved in a social studies assignment, heard a rumor about Sendler and decided to pursue the story. Thanks to these girls the incredible story of Irena Sendler’s wartime activities was publicized worldwide at the Milken Center .

Irena Sendler was an employee of the Warsaw Department of Welfare when the Germans invaded Poland in 1939. She became an active member of the Zagota underground — a resistance group which specialized in assisting Jews who were trying to escape from German persecution. In conjunction with Zagota Sendler helped Jews find hiding places and obtain false papers to enable them to hide. By 1940 Sendler was Zagota’s head of children’s services and she began to look for ways to help Jewish children escape from the Germans.

In 1940 the Germans built the Warsaw ghetto and imprisioned almost half a million Jews behind the ghetto walls without adequate food, shelter or medical care. Irena Sendler was able to obtain a pass that identified her as a nurse. She had free passage into and out of the ghetto and, at first, she used her pass to try and smuggle food and medicines into the ghetto. Sendler quickly saw that such efforts were like a drop in a bucket and she decided that, in order to help the largest number of people, she would have to find another course of action.

Sendler and the Zagota organization devised a plan which would allow her to smuggle children out of the ghetto. She began to pick children off the street — children whose parents had been murdered or simply disappeared. She sedated the children and smuggled them out of the ghetto by hiding them in toolboxes, luggage and in wagons under barking dogs and garbage. She found tunnels and sewers under the ground and, using those tunnels, was able to lead the older children to the “free” side of Warsaw.

Sendler’s next course of action involved speaking to parents and asking them to allow her to take their children out of the ghetto. In an interview that Sendler conducted in 2004 she described those experiences.”I talked the mothers out of their children. Those scenes over whether to give a child away were heart-rending. Sometimes, they wouldn’t give me the child. Their first question was, ‘What guarantee is there that the child will live?’ I said, ‘None. I don’t even know if I will get out of the ghetto alive today.” Many parents refused to allow Sendler to take their children. They held out hope that, by staying with their families, the children had the best chance of survival. Other parents were concerned that the children would not be able to survive among anti-Semetic Polish gentiles. Over the course of two years however, Sendler was able to smuggle over 2500 children out of the ghetto. She recorded their names and their hiding places on pieces of tissue paper and hid them in glass jars which she buried in her yard. Zagota found hiding places for the children in convents, orphanages and with sympathetic Polish families.  Sendler was arrested after the fall of the Warsaw ghetto and sentenced her to be shot but Zagota was able to rescue her and she lived out the rest of the war in hiding. When the Kansas students began to research Sendler’s actions during the war, there was little information available, but Sendler herself was still alive. The girls obtained funding that allowed them to travel to Poland and interview Sendler. They then created a massive project, Life in a Jar, to honor Irena Sendler’s heroism and bravery.

Below is the ‘L’ Card from Avi Raanan issued to his Grandmother, Ester Katz in 1941. You can enlarge the card by clicking on it.

The card was sent to me and also sent to Hedwig Brenner who commented:

“Hi Avi , thanks for sending me this document.
This is the famous “L-Karte”, the only valid document, the authorisation to
remain in Czernowitz.. Now it is a memory, an old document, but then its
value was millions…. I have the same, but mine does not have so many notices on
it. May be your grandmother’s document was submitted to controles. Never
mind, she was not deported to Transnistia.. therefore you are living….
Best,
regards
Hedwig”

Translation of above:
Town Hall of the municipitality of Cernauti
Declaration
The undersigned….
Jewish head of family, declares that he is a resident of Cernauti,
street…
and before the establishment of the ghetto resident at…..
am …. years old. My profession is ….
I have been living in Cernauti from… which I can prove with…..
With me live those mentioned below….
This declaration is valid for 4 four people.
Signed by Dr Traian Popovici, Mayor of the municipality of Cernauti and by the delegate of the government of Bucovina Major Mihai Iliescu

More about the permit and other documents from Mimi Taylor Here:

Liviu Carare: “The events in Czernowitz during 1941-1942 are a constituent part of the phenomenon of “ethnic cleansing” developed by the Romanian state immediately after the reconquest of the territories ceded to the USSR in the summer of 1940. The Jewish population of the city was enclosed in a ghetto as a preliminary measure to their deportation to Transnistria. The deportations were halted three days later because the Romanian authorities had realized that the majority of professionals and technicians in Czernowitz were Jews. These actions were possible due to the Mayor of Czernowitz, Dr. Traian Popovici, who managed to persuade the Romanian military governor and the head of state, Ion Antonescu to spare 20,000 Jews from deportation, claiming that they were vital to the economic stability of the town. The mayor attempted to stop deportations, issuing more than 3,000 certificates of exemption from deportation, but the officials of the municipality, the police, and the gendarmerie extorted enormous sums of money in return for these exemptions. Many Jews were deported even after they paid the ransom. The report captures the details of the establishment of Czernowitz ghetto, planning and organization of the deportations, but also how mayor Traian Popovici and other members of the sorting commission prepared the tables with Jewish experts in Czernowitz, saving from deportation sometimes even whole families.”

Frieda Tabak (18.05.2012): I clearly remember the green ink in which, for $10,000 Lei, our name was added to my uncle’s typed certificate. We were too afraid to use it. Luckily, we obtained our own certificate some weeks later and were able to remain in CZ.

Mordecai Lapidot (18.05.2012): Chapeau to Liviu Carare for having located and published the fascinating, horrifying, but greatly revealing document of the Commission of Inquiry set up by the Fascist Authorities re the saving of more than 20000 of Czernowitz Jews (myself and my parents and relatives amongst them) from deportation to Transnistria. Having read the Romanian report of the Commission it is clear to me that in a way the Commission “laundered” the actions that were performed by Popovici and the other officials involved. As they mention there – you cannot prove the actions of bribery since neither the bribers nor the bribed can be expected to volunteer confirmation of their acts… As if the Sigurantza of the Fascist Regime could not have extracted the information had they wished to do so… All they mentioned in detail in their report were the discrepancies they discovered in the lists of those who were saved, e.g. persons that were obviously not of the profession that was recorded, or the names added in pencil or ink to the typed lists. I was 8 year old at the time but aware, from rumours that went around between the grown-ups, that apparently some bribery was involved. However it was believed not to be related to Popovici himself but to the many intermediaries. Now I learned a lot about what really happened from this and the other articles mentioned below.

Chapeau also to Edgar for locating this article by Liviu Carare. It is worthwhile to enter his name in Google – I found a number of interesting related articles by him. One about our Ghetoization in Czernowitz – CONSIDERAŢII PRIVIND PROCESUL DE GHETOIZARE A EVREILOR DIN CERNĂUŢI
http://www.history-cluj.ro/Istorie/anuare/AnuarBaritHistorica2010/07.pdf

Another – a collection of articles “Partide politice şi minorităţi naţional din România în secolul XX” includes some interesting articles: one on p. 11 “The Resolution of the Hebrew Issue in the Romanian Principalities (1848-1866) between Political Will and Social Failure”, one by Lya Binyamin on p 51 “Idei diriguitoare în Mişcarea Sionistă din
România. Congresul Sionist din 1919”, and one on p 247 by Liviu Carare based on the above mentioned report of the Commision of Inquiry “Deportările din Cernăuţi (1941). Mărturii pe baza unui raport de anchetă informativă”
http://istorie.ulbsibiu.ro/cercetare/Texte/Partide%20politice%20%205.pdf
as well as few others related to antisemitism in Romania and fate of Jews in other cities – e.g. Transilvania.  Of course, only for those of us who still read Romanian, but all can benefit of the abstracts in English.

Ken Cutler (17.05.2012): I can’t recall if this was in the discussion about Popovici but these are his words translated:
http://www.jewishgen.org/yizkor/bukowinabook/buk2_062.html END_OF_DOCUMENT_TOKEN_TO_BE_REPLACED

I’ve (jerome, that is) taken a shot at reprocessing the original. I’m not sure it’s any more help, but for what it’s worth… 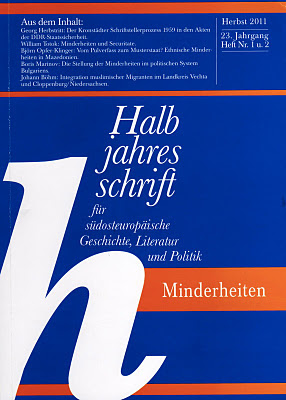 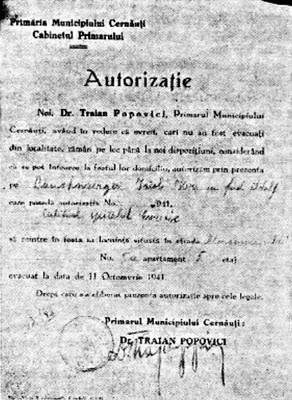 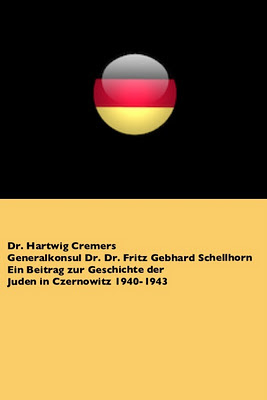