Trancription/Translation by courtesy of Berti Glaubach 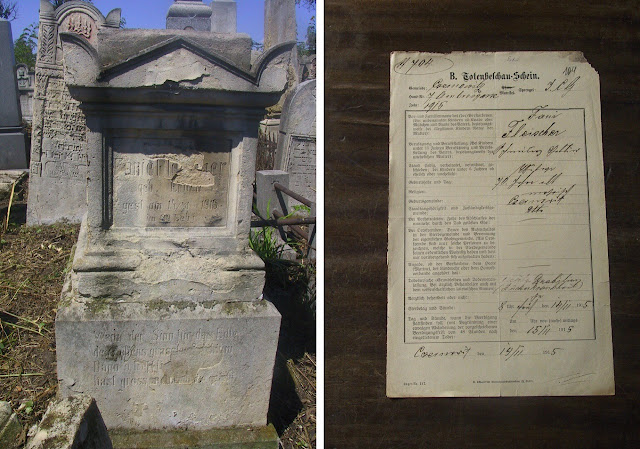 Excerpt from the article “On the history of the Jews in Czernowitz” by Prof. Dr. Herman Sternberg: “During the war years, Czernowitz could hardly be recognized. People frightened and weighed down with troubles, hurried like shadows through the streets. Military uniforms dominated the cityscape. Officers and tired soldiers were on their way to or from the railroad station. The station building, heated in winter had become a dormitory. Soldiers slept on the floor pressed closely together, leaving no space free. Anyone seeking the entrance had to step over them. The closer the war came to its end, the greater became the lack of food and other necessities. The most difficult articles to obtain were fuel and foot wear. Prices rose from day to day. The greatly reduced Jewish population suffered indescribable difficulties. Intellectual life had died completely. After the fall of darkness, all traffic ceased because the street lights didn’t work. Families generally restricted themselves to one room, dimly lit with an oil lamp. The only topic of conversation was the war and its consequences.”

“The Osias ‘Shike’ Stenzler Radautz Booklet” is a unique document compiled by Osias Stenzler over about three decades until his death in the year 2008 at the age of 99 years. His memory, unlike his eyesight, never faded, even at an advanced age. After the loss of vision, Osias’ sons Daniel and Bondy kept his records from dictation and so we have the rare opportunity to discover a real treasure chest making alive the Jewish life in post WW2 Radautz. The booklet is headlined “Occupations and Professions Practiced by the Jewish Population of Radautz”, but beyond the long list of names it contains authentic notes and remarks on the Radautz Jewish community.

Source: The Russian-German Project to Digitize German Documents in the Archives of the Russian Federation

Under the headline “Discovering my 99% family” the Jewish Independent, Friday 04th, December 2015 edition, is publishing an outstanding article by Shula Klinger, author, illustrator and journalist living in North Vancouver. Shula is describing her success story researching her family history by becoming connected with Cyril Leonoff. Both Shula and Cyril are related to Betty Brotman, or more precisely Betti Brutmann, as per Shula’s grandmother’s birth certificate from Czernowitz in 1902. Shula writes: “… my older son asked me again. ‘Is he a relation? Is he ours?’ I told him, ‘Very possibly.’ And, again, he wanted to know the percentage probability. ‘Ninety-nine percent, then,’ Benjamin decided.” Since “Brotman” was initially “Brutmann”, as has been proven by the metrical records, why not going back to Bukovina as early as at the end of the 19th century, looking for the first Brutmanns, who setteled there? The register for “Jewish Taxpayers in Bukovina the the End of 18th Century” provides evidence:

Around 1798 there were just two Jewish families in Onut [Pereunegru/Paraul-Negru], 25 mi north of Czernowitz, namely the Liedermads and the Brutmanns. The farmer Juda Brutmann and his wife Demuth [“Devotion”, sic!], née Salomon, had two daughters, Esther and Susanna. While Esther, born April 25th, 1795, deceased at the age of 2½, Susanna, born October 1oth, 1798, survived.

If, by any chance, Benjamin is going to ask me “Are we 100% for sure, for sure somehow related to the Brutmanns from Onut, Edgar? Or just 99%, do you think?” I’d say in reply: “Benjamin, I don’t know exactly (yet), but for sure not very much less than 99%.” Shula, Benjamin’s mother, keeps following her family roots and with respect to our group she writes: “I have also found a home at Czernowitz-L, an email group hosted by Cornell University for people whose families come from what is now the Ukrainian city of Chernivtsi. Once known as ‘Jerusalem on the Prut,’ Czernowitz – as it is still called by those who recall its Habsburg past – was once home to 50,000 Jews. Less than a third of this number survived the war. Like many third-generation Czernowitzers, I write messages to Czernowitz-L in the hope that someone, somewhere, will remember hearing my family name and be able to point me in the direction of a lost relative. Very often, we hear nothing, but once in a blue moon, we strike gold.”

I, Alfred Kittner, was born on November 24, 1906 in Czernowitz. My father, Heinrich Kittner (dead in 1932) was an accountant, my mother, Cecilia Kittner, born Kapralik, died in 1910, when I was barely 3 years old. I attended primary school and high school in Vienna, where my father lived during the First World War, and in Czernowitz. After graduating high school in 1925 and after attending for a year the Sciences Department of the Czernowitz University, I performed my military service as an infantryman in Satu Mare (1928-1929) and then I attended German Studies and German literature courses at Breslau University, where I began my literary career. In 1932, back in Czernowitz, I worked for a year in the accounting department of the Marmorosch-Blank Bank, and in 1933 I started as an editor with the “Der Tag”; (The Day) newspaper in Czernowitz, at which paper I worked as secretary, literary editor, spell-checker, reporter, etc. until 1936, when this newspaper became Czernowitzer Tagblatt. I worked in my former capacity at this newspaper as well, until it was suspended once the Goga-Cuza Cabinet came to power in 1939. This year I also published a volume of poetry. As a publicist, I always fought for the cause of democracy, against obscurantism, and I revealed, among other things, in my articles, the terrorist means and persecution applied by the Czernowitz police against the Communist prisoners. Throughout this time, I have been an occasional collaborator of literary magazines from Viena, Prague, etc.

In 1940-1941, after Northern Bukovina was annexed to the Soviet Russia, I worked as a librarian with the Regional Czernowitz Library, and as a censor of the foreign books, and I collaborated with the Moscow International Literature Magazine. In 1941, I was deported, having been black-listed as a democratic publicist, by the secret police of Gen. Antonescu. With my familyat Bug, after three torturous years in several extermination camps {Cariera pe Bug (Bug Quarry), Cetvertinovca, Demidovca, Obadovca} being freed by the victorious advancement of the Red Army, I returned to Czernowitz, where I restarted my former job at the Library. In the meantime, my brother in law was mobilized as a military medic and a captain in the liberating Polish Army, sent [invitations] for the entire family. This is how I ended up in Poland, from where I returned to my country after my brother in law was released from the military.

In October 1945 I became a librarian with Arlus [Association for closer Ties with the Soviet Union – Asociația Română pentru strângerea Legăturilor cu Uniunea Sovietică] Library, in which capacity I work even to this day, and in January of this year, I began to work as a radio anchor.

[Translation by courtesy of Elena Iuga]

The process of assigning permanent surnames to Jewish families (most of which are still used to this day) began in Austria. On 23 July 1787, five years after the Edict of Tolerance, the Austrian emperor Joseph II issued a decree called “Das Patent über die Judennamen” which compelled the Jews to adopt German surnames. In addition, imperial decrees dated November 12, 1787 and December 13, 1787, supplemented March 11, 1799, required Jews of the Habsburg Empire, included Bukovina, to choose personal given from lists of 121 male and 37 female names. These included German forms of biblical names, a small number of German Christian names, and a few Yiddish appellations.